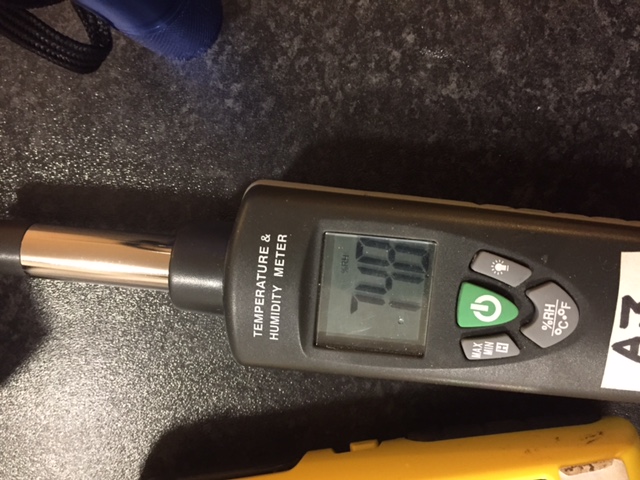 The contractor had proposed a 500mm width trench to be dug-out and the footings of the property exposed. His reasoning being, all moisture-laden soil in contact with the external surface of brickwork below ground-level would be alleviated and the brickwork/footings given time to dry out.

Alfred approved the works to be undertaken and at considerable expense, the footings were indeed exposed. These works were conducted by hand with the aid of two laborers.

No ‘heavy plant’ was used in this process; all digging was by hand with spades, picks and shovels.

The second part of the proposed works would be several months after completion of the trench. It was as this ‘second-part’ was to commence in a number of days, that Alfred contacted me.

Alfred was beginning to question his decision to have the proposed works undertaken; he had taken further advice and now questioned the validity of what was essentially considered an out-dated method of resolving an ingress.

After approving of the method ‘in principle’ I arranged an inspection and met with Alfred at the property a couple of days later.

When I arrived at the property, Alfred expressed his concerns that perhaps a chemical DPC would be the preferable option. He needn’t have worried; after taking a number of protimeter readings and measuring the distance between ingress and salt-band, I assured him the walls were almost entirely free of saturation-level ingress. The moisture content within the masonry was at a dramatically low level; evidently the contractor was experienced and his proposed method was the correct one.

I advised Alfred to credit his contractor with the ability to complete the required works.

Alfred’s other two properties had extensive mould and mildew problems; these were rectified in both instances through heating, ventilation and a degree of external repellency.

According to the previous owner, the former tenants had greatly increased condensation and resultant stachybotrys growth through damp laundry. I believe in both cases, the tenants had been students.

With improved rail-links and continued major investment, Medway and Rochester in particular, continues to be a viable option for a great many who are interested in larger properties that retain some history and character. However, it won’t remain so for long. Over time, most of these properties will become out of reach to all but those in an enviable financial position.

A desirable 6 bedroom semi-detatched period property half a mile from Rochester town centre will currently set you back around £795,000; in comparison, an almost identical property located in Forest Hill, London SE23, will cost in the region of £1,600,600.

When you take into account how rapidly property prices increase regardless of the state of the economy, you shouldn’t allow damp to be a factor in your decision to buy.