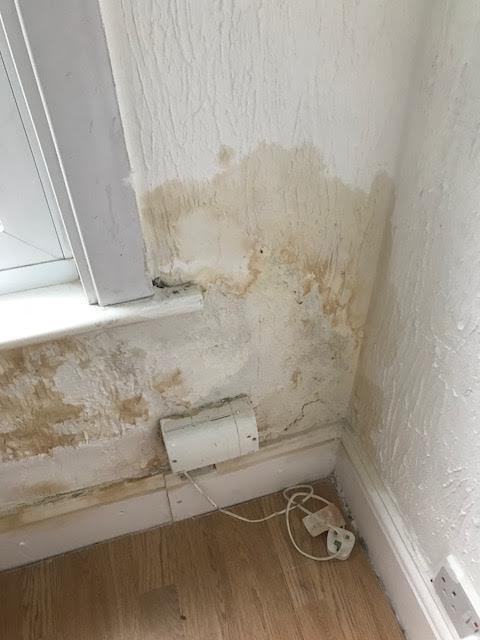 Karen Saunders says she’s living out of carrier bags due to damp in her home in Erith.

A grandmother says she has been forced to live out of carrier bags as damp at her council home has left the bedrooms “uninhabitable”.
Karen Saunders, 62, has lived in a two-bedroom bungalow in Erith, for four years.
But she says the property has started to subside, causing cracks to appear and damp to take hold inside.

“The damp’s so bad in the bedrooms, that for three-and-a-half years I’ve slept on a reclining chair in the lounge,” said the mum-of-five, who lives alone. I’m living out of black sacks and suitcases, as the cupboards get damp.”
Ms Saunders once enjoyed having her children and four grandchildren to stay with her at weekends. But now she can no longer accommodate them.
Ms Saunders says she reported the issues to the council straight after moving in, but claims the authority has failed to take appropriate action.

A Bexley Housing spokesman accepted that work is required to fix the damp. They added: “Unfortunately the tenant has cancelled the arrangements that have been made for the work to be carried out on a number of occasions and earlier this month she told us she did not want anything to happen.

“Housing officers and maintenance staff visited Miss Saunders again last Tuesday and we believe we have now agreed a plan of action with her although this will require access to her property.
“We are also looking at other ways we can support her in order to get these improvements to her home carried out.”

“There’s no damp-proofing around the bungalow, so the damp is coming up from underneath the house.”
Ms Saunders once enjoyed having her children and four grandchildren to stay with her at weekends. But now the moisture problem has grown so bad she can no longer accommodate them.
“I used to love having my grandchildren to stay, but one of my grandchildren is severely asthmatic and I can’t use the bedroom, so they can’t come here any more. It makes it very tricky.”
Ms Saunders says she has also developed scabies and has been forced to use an asthma pump since the dampness has escalated.
Her niece Diane Foley says she is extremely concerned about her aunt’s living conditions, and hopes she will be moved.

“Her health is seriously deteriorating,” exclaimed Mrs. Foley. “I am so worried it could kill her.
“In two years, she’s lost two stone – she now only weighs six-and-a-half stone. She has constantly got a chest infection caused by the damp and mould.
“She’s feeling isolated as well. She lives for her grandchildren, and misses having them around.
“The house is clearly subsiding. My auntie’s been paying extra bedroom tax, but hasn’t been able to sleep in either of her bedrooms because the walls are wet to touch. Everything gets damp and mouldy. The smell hits you the second you walk in, even though she cleans it every day.”