It's an often overlooked fact that specific types of damp are far more prevalent  in one part of Medway than another.

Why is it Rochester properties often suffer damp fireplaces and chimney stacks, whereas this remains an uncommon occurrence in Strood ?

The ME2 area of Strood, which envelops Halling, Cuxton and Frindsbury, is mostly associated with a predominance of first floor external porosity accompanied by a ground floor breach of DPC usually affecting the lounge and hallway. However, the breach/bridging of DPC in Strood properties mostly affects the dining room, kitchen and perhaps bathroom.

The ME5 area of Chatham, which covers amongst other places Walderslade, Blue Bell Hill, Lordswood and Luton, is an area where a breach of DPC often affects party and flank walls. These cases of ingress quite often cause unsightly and potentially harmful black mould.

Chatham in regard to landscape and it's effect on property has many similarities to the ME15 area of Maidstone, which includes in it's boundaries Bearsted, Tovil, Shepway and Downswood.

The ME1 district of Rochester also extends into ME2 and ME3 with areas like Burham and Higham, where a ground floor ingress can pervade a properties entire perimeter walls and floor; the results of which can rapidly worsen, giving the appearance of flood damage.

There are two fundamental reasons for the correlation of specific types of damp to a particular area in Medway:

1) Landscape- The geographical location of property.

2) Construction - The methods and materials used during development.

The Landscape of Medway 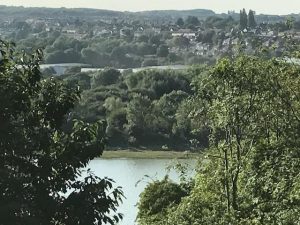 Medway is quite unusual for the South East with large expanses of both lowland and areas of high ground in close proximity. It's self explanatory that any development atop exposed inclines will be prone to the severities of inclement weather on the upper floors and roofs. The River Medway runs conterminous between Gillingham, Chatham and Rochester on one side and Strood, Wainscott and Hoo on the other. The area as a whole has taken the brunt of many historically recorded extreme weather conditions which were further exacerbated by the close proximity to the river. However, where development is located in the lowland area, ingress at ground floor level remains a risk. If not a risk of flooding, then concentrated moisture content retained below ground-level for prolonged periods leaving footings prone to saturation as a result of un-drained sodden ground.

In both instances, saturation below ground level or over exposure to the elements will have incrementally negative consequences to any property.

Cecil Road Rochester ME1 is a text book example of how property owners towards the bottom of a hill mostly report rising damp and those on the high ground report issues as a result of exposure to sun, rain, snow etc.

In a recent review of our records, Rochester Building and Damp can confirm that in the last five years alone, works have been undertaken at nine properties in Cecil Road.

When the records on each property were studied, it was clear that a direct correlation existed between those properties at the top of the hill and those below. When this occurrence is applied to whole areas that may encompass an entire village, its easy to see how so many properties can suffer the same particular types affliction without a seemingly obvious reason. 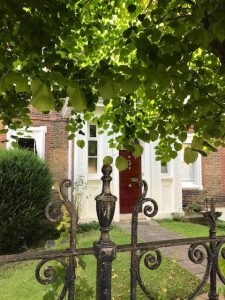 The era of construction in correlation with location, is an accurate enough measure to statistically calculate the prevalence of specific forms of damp.

According to the Office of National Statistics which has collated data on South East residential development, it's estimated that 65% of property in Medway today was built between 1870 to 1909.

This statistic alone confirms the majority of housing throughout Medway was constructed during the Victorian era.

In comparison to Victorian development, modern residential construction is by all accounts negligible.This has to be put into context; Victorian development was fueled by industry relating to the Dockyard, the armed forces and businesses that would flourish in such an environment. The housing, premises and infrastructure from the 1800s that survives today is indicative of the relative prosperity and importance of Medway at the time. Vast swathes of common land, meadows and scrub-land  were virgin territory for the onslaught of industrial scale housing development that began in the 1830's and 1840's and was centrally located in Rochester, Chatham and Strood.

Victorian property was almost uniformally constructed from Imperial sized Stock bricks, manufactured locally and throughout Kent. Victorian entrepreneurs were quick to establish highly industrious brickfields around Kent and Essex inland waterways. By 1870 the road layout and property development stretching through the Medway towns would be quite recognisable in appearance to us today. From 1870 and into the early twentieth century, many thousands of terraced properties radiated from the central locations of Rochester, Chatham and Strood and eventually in-filled practically all remaining land available to developers at the time.

Only a small percentage of properties built between 1830 to 1870 have ever been demolished for redevelopment purposes; the large majority still remain intact. The extensive Victorian housing development of 1880 to 1900 that can be seen in places like Chatham Hill ME5, Magpie Hall Road ME4 or James Street Gillingham ME7 remains almost identical in appearance when observed today. If you are able to see past the external render, double-glazing and other modern aesthetics, the general layout of each property is the same.

When consideration is given today regarding the limitation of Victorian residential construction, we can more easily understand the correlation between location, construction and types of damp.

Stock brickwork is highly porous; when exposed to the elements in regions of high ground the resultant reported ingress is often identified in a familiar pattern recognisable in similarly affected properties.

Footings in Victorian houses are generally little more than several courses below ground-level that may or may not taper outwards to spread the load above; in addition there may be a 50-100mm-thick clinker bed which is much like modern strip-foundations but without the density of modern concrete. In properties located in lowland settings, the concentration of water at footings level will invariably be in-breach of original DPC.

It should be taken into account that the effects of landscape in conjunction with construction methods/materials corresponds with the sub-base that the footings are built upon.

Irrespective of whether a property is Victorian and has no discernible foundations or was built in the last twenty years with one metre deep footings, the capacity for natural drainage has considerable importance. This is not to imply that perimeter land drainage cannot be installed retrospectively, it is always an option if required.

A house built at the bottom of a gradient is prone to the adversities of concentrated moisture content below ground-level, if the property has been built on a chalk bed with or without modern concrete footings, the chalk bed can be of significant worth in allowing a degree of drainage. However, this is entirely dependent of the original trench and back-fill. If the trench for footings was originally dense clay and back-filled with clay laden soil as was often the case, the brickwork below ground-level is retained in an environment of consistent saturation. This is an environment which will incrementally erode footings-level brickwork, eventually to a degree that may affect structural integrity. This deteriorating effect can be further amplified where there's a leak form external drainage; the kitchen or bathroom waste external gully for instance.

Conversely, brickwork below ground-level on a chalk bed, in a trench which has been back-filled with chalk, allows for a degree of drainage.

The most visible example of masonry permeation is in the many cellars and basements of Medways Victorian properties.

Rochester Building and Damp has undertaken remedial works to five properties in Clive Road Rochester ME1 since 2012; there have been four similar works completed in James Street, Gillingham ME7 and three in Balmoral Road ME7. In all these instances, the external ground-level gradient, original back filled material, and geographical location in regard to the Medway undulating landscape all held great significance.

Each era of development subsequent to 1910 has properties with their own susceptibilities to ingress particular to their design and construction.

As an example, the introduction of cavity walls in the early twentieth century was an innovation which has received ongoing development right up to today. Unfortunately, many ingress related issues associated with early cavity are now being dealt with one hundred years later. Again, the preponderance of damp issues associated with early cavity walls in Medway are mostly restricted to Rochester ME1. The reasons for this are twofold; firstly when cavity walls were introduced, the central and therefore flatter regions of Rochester were already built on, thus properties of considerable worth were being built on surrounding gradients. Secondly, cavity walls remained the chosen construction method for properties designated to the upper middle class. This continued into the 1930's, when cavity walls were commonplace in the construction of bungalows; examples can be seen along City Way Rochester ME1. Surprisingly, complete uniformity in construction practices regarding cavity walls did not occur until the 1950's.

Rochester Building and Damp ensure at inspection stage that the source of ingress in your property is always located.

The Free Report and Quotation details all aspects of why the property is damp, including whether the location is in a high risk area.

We itemise proposed works and provide singular price for labour and materials. Unlike other timber and damp companies we never give a vague estimate of cost.